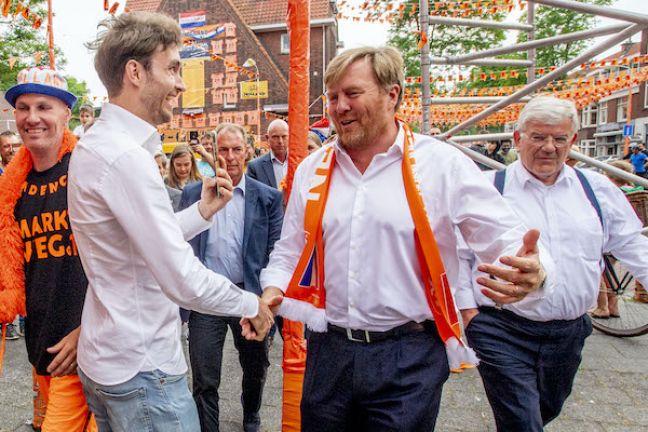 The king during his visit. Photo: Robin Utrecht

SINT MAARTEN/THE NETHERLANDS – King Willem-Alexander has been told off by ministers for flouting coronavirus rules during a meeting with football fans ahead of Thursday’s game against Austria.

The king was seen shaking hands and disregarding the social distancing rule when he visited ‘Oranje street’ in The Hague where a crowd has massed to greet him.

Caretaker justice minister Ferd Grapperhaus, who was himself fined for not keeping to the rules at his wedding, said that everyone, royals included, should keep to the rules, ‘no exceptions made’.

‘We do not have these rules in place for nothing,’ broadcaster NOS quoted caretaker medical care minister Tamara van Ark as saying.

‘I think that in the enthusiasm of the moment, social distancing was forgotten but it serves as a good reminder that we have to continue to keep 1.5 metres apart.’

The Hague mayor Jan van Zanten said that attempts at social distancing has been made but that the crowds had made it impossible. It’s not the first time the king is seen to ignore coronavirus rules.

In October he travelled to Greece on holiday at a time when foreign travel was not recommended. In August last year again in Greece he and queen Máxima were seen at close quarters with a local shopkeeper.

The shoe is sometimes on the other foot, however. Attending the opening ceremony of a cultural centre in Oegstgeest last month when photographers crowded around him and the queen, Willem-Alexander was heard to mumble behind his mask that clearly ‘social distancing is for others’, the AD said.

Rate this item
(0 votes)
Tweet
More in this category: « Dutch scrap most Covid rules from June 26, holidaymakers asked to take a test on return Police issues warning about unlawful gatherings after 11.00PM. Face fine or Arrests »
back to top