Constanza Portnoy A father plays with his daughter during the COVID-19 pandemic in Buenos Aires, Argentina.
INTERNATIONAL, 22 February 2021, Human Rights - Human rights are not just a theory: they have an immediate impact on people’s lives. Photography 4 Humanity, a UN-backed competition, is inspiring photographers to capture striking images of grief, inequality and resilience. 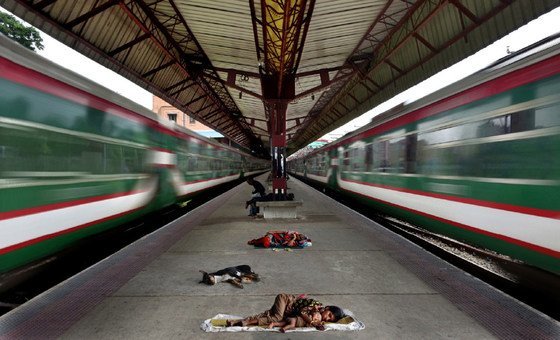 In Bangladesh, people sleep rough in dangerous and unhealthy conditions at a train station in Chittagong. , by Mohammed Shajahan

People sleep rough on a train platform in Chittagong, Bangladesh, oblivious to trains speeding past in either direction; an Argentinian man playing with his daughter, ignoring his lack of arms and legs, a consequence of the drug thalidomide; and an Indonesian teenager literally sees the light, as it streams into the prison cell where he is being held after recovering from the effects of powerful synthetic street drugs which rendered him aggressive.

Here you can see more of the powerful stories, told in images, which have been submitted by professional and amateur photographers for this year’s Photography 4 Humanity exhibition.