UNMISS Intercommunal fighting has been on the rise across South Sudan.
INTERNATIONAL, 22 May 2020, Human Rights - The UN High Commissioner for Human Rights on Friday condemned a fresh wave of intercommunal violence in the world’s youngest nation, South Sudan, that has left hundreds dead across 28 villages in Jonglei State, according to local authorities.

Three aid workers were among those killed.

#SouthSudan: We condemn a new outbreak of intercommunal violence in Jonglei State that has reportedly left hundreds dead according to local authorities.

"This recurring pattern of violence, which continues to claim lives... has to stop" - @mbachelet https://www.ohchr.org/EN/NewsEvents/Pages/DisplayNews.aspx?NewsID=25902&LangID=E … 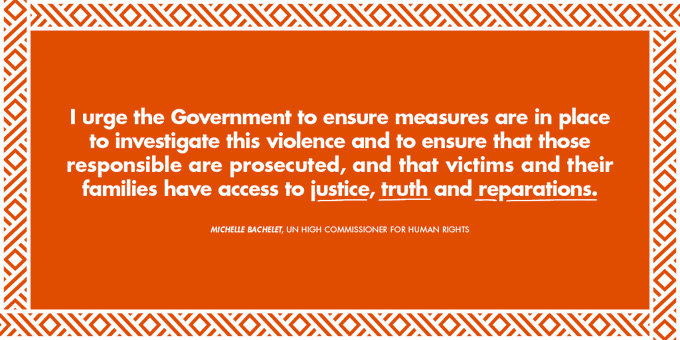 “The reports from Jonglei State are appalling”, Michelle Bachelet said of fighting that broke out between 16 and 17 May, forcing thousands to flee their homes.

“This recurring pattern of violence, which continues to claim lives in South Sudan, has to stop,” she said.  “I urge the Government to ensure measures are in place to investigate this violence and to ensure that those responsible are prosecuted, and that victims and their families have access to justice, truth and reparations.”

Intercommunal fighting has been on the rise across South Sudan.  In the first quarter of 2020, it was the main source of violence affecting civilians, having led to 658 deaths, 452 injuries, 592 abductions and 65 cases of sexual violence.

In Jonglei State and the Greater Pibor Administrative Area, a series of attacks from mid-February to early March, left 22 civilians dead.  Most of the 266 women and children abducted during the fighting have not been released from captivity.

The region has suffered years of food insecurity and was severely hit by flooding in 2019.

Ms. Bachelet – a former Head of State, leading Chile’s Government for two terms – has been vocal about what it will take to ensure durable peace.  She most recently pressed South Sudanese authorities in mid-March to address escalating tensions.

The nature of intercommunal fighting – long driven by tensions over access to water and grazing land for cattle – has taken on a militarized character in recent years, with military style tactics and military-grade weapons.

“State authorities must act to end these cycles of retaliatory violence, including by holding those responsible to account and promoting peacebuilding between individual communities”, Ms. Bachelet stressed.

Humanitarian Coordinator in South Sudan, Alain Noudéhou, reported that a Médecins San Frontières staff member, and two staffers from another humanitarian organization, were killed during intense fighting in and around the town of Pieri, in Jonglei.  Several aid workers are still unaccounted for.

“I condemn in the strongest possible terms the killing of three aid workers in Pieri and call for those responsible to be brought swiftly to justice,” he said.  “The Government, all parties and communities, must step up efforts to protect humanitarians who are taking great risks to their safety in order to provide much needed assistance.”

Intercommunal clashes and armed conflict are hampering humanitarian efforts to pre-position food, medicine and other supplies in the final weeks before the rains grow heavier and cut off road access to vulnerable communities, the Coordinator said. “Humanitarians must be able to reach affected communities freely and without fear.”