© UNICEF/Amminadab Jean Eight-year-old Filomena, born with spastic quadriplegia and epilepsy, and her mother colour in drawings at the psychosocial rehabilitation centre in Maputo, Mozambique. (8 October 2018)
INTERNATIONAL, 7 December 2019, SDGs - The international community has agreed truly ground-breaking frameworks to advance the rights of persons with disabilities, including in the context of development, but there remains a significant gap between these ambitions and the reality experienced daily by millions of persons with disabilities, UN Deputy Secretary-General Amina Mohammed told a conference in Doha on Saturday.

With 181 State Parties, the Convention on the Rights of Persons with Disabilities is among the world’s most widely ratified human rights treaties and the 2030 Agenda for Sustainable Development makes a firm commitment to ensuring that persons with disabilities are not left behind in the international community's quest for peace and prosperity on a healthy planet.

But wide gaps remain between these ambitious steps and the daily reality faced by the world’s estimated one billion persons with disabilities, some 80 per cent of whom live in developing countries where they are among the most marginalized in any crisis-affected community.

“The number of persons with disabilities living in poverty and hunger is higher than, and in some countries double, that of the general population,” the Deputy Secretary-General said in her remarks to the opening ceremony of the Doha International Conference on Disability and Development.

The motto of the disability community is “nothing about us, without us” - this should be true not only in how the @UN engages with civil society, but in all areas of our work as we strive to uphold the great promise of the UN Disability Inclusion Strategy. #DICDD #SDGs 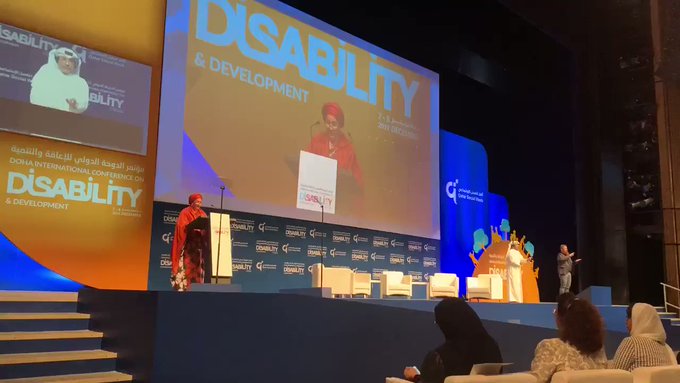 In all regions, stigma faced by persons with disabilities abounds, compounded by a lack of understanding of their rights, and of the value of their contributions to society. Ms. Mohammed stressed that stigma continues to fuel systemic discrimination, with persons with disabilities denied equal access to education, the work force, health care and opportunities to participate in public life.

“And, for many persons with disabilities, in particular women and girls, the discrimination is multiplied,” she said.

More must be done to reverse ‘untenable situation’

“This situation is untenable. It goes against our collective commitment to human dignity, our obligations under international law and the strong business case for disability inclusion,” said Ms. Mohammed, declaring: “It is up to us – leaders from government, business, civil society, organizations of persons with disabilities, international organizations and others – to turn this situation around.”

Earlier in her remarks, the UN deputy chief noted “the tireless efforts of Her Highness Sheikha Moza bint Nasser”, whom hailed as “one of the most dedicated advocates we have for improving education around the globe and ensuring no one is left behind, especially persons with disabilities.”

Ms. Mohammed went on to recall that in September, UN Secretary-General António Guterres called for a Decade of Action to deliver the Sustainable Development Goals by 2030. And in doing so, he called on people everywhere to join a global movement for people and planet – for social inclusion, for climate action and for gender equality.

“In answer to this call, we must step up our collective performance on disability inclusion,” said Ms. Mohammed.

Setting out key areas where progress was necessary, the Deputy Secretary-General said that some countries still need to work harder to increase the availability of high-quality, timely and reliable data, disaggregated by disability, to inform their approaches to disability inclusion.

Ms. Mohammed also called for improved accessibility, which she underscored as “a precondition for the full inclusion and meaningful participation of persons with disabilities in our society.”

Finally, she urged support to persons with disabilities in conflict and humanitarian settings.

“Now we must work together to bring the commitments of these documents into action,” she said.

Ms. Mohammed said that through collaboration across UN Offices and Agencies, UN Country Teams, Regional Commissions and the UN Secretariat, practical assistance and training materials have been prepared and delivered to countries in Africa, Asia, Eastern Europe and Latin America to help navigate the challenges faced by persons with disabilities.

This past June, the Secretary-General launched the first-ever United Nations Disability Inclusion Strategy, a framework for action by the UN System. “The Strategy is our commitment to persons with disabilities – establishing the foundation for the systemic and sustainable change we need,” said Ms. Mohammed, explaining that it calls for action in four core areas of responsibility: leadership, strategic planning and management; inclusiveness; programming; and organizational culture.

The international community has made many advances in recent years in terms of disability inclusion. “But we have much more to do. As we look ahead to the Decade of Action, all of you have an essential role to play.”

Rate this item
(0 votes)
Tweet
More in this category: « Denouncing attacks against Baghdad protesters, UN warns ‘violence risks placing Iraq on dangerous trajectory’ Corruption thwarts attempts to build a better world and 'must be fought by all, for all' »
back to top