FAO/Sue Price There is no effective vaccine to protect swine from the ASF disease.
INTERNATIONAL, 7 November 2019, Health - A rapid spread of African Swine Fever (ASF) is wiping out pig herds in China, the UN’s Food and Agriculture Organization (FAO) said on Thursday, and the killer disease has led to a drop in world meat production for the first time in more than 20 years, with other global staples also facing new threats.

The Organization’s latest Food Outlook, published on Thursday, anticipates ASF will lead to a contraction of at least 20 per cent in the output of pork products in China, the world’s largest producer, accounting for half of all global production.

As a result, the combined output of cattle, sheep, poultry and pig meat is forecast to total 335 million tonnes in carcass weight equivalent - one per cent lower than the previous year, according to FAO.

ASF prompted soaring prices for pig meat earlier this year, as China’s first reported outbreak in 2018 took hold, affecting 34 mainland provinces as of this July, where tens of millions of households depend on the animal for income. 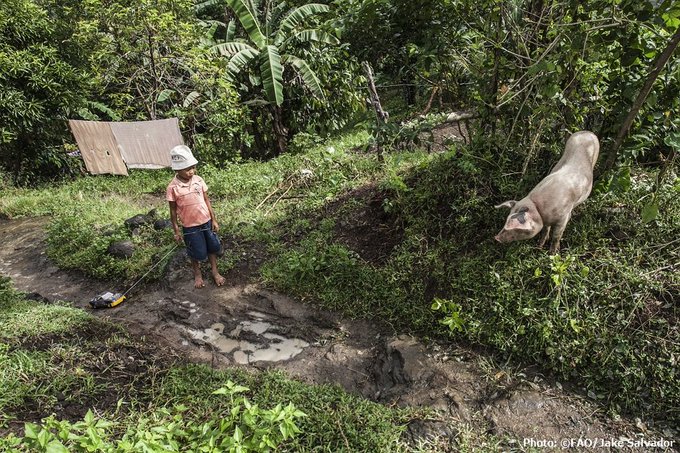 The current failure to curb the highly-contagious disease is expected to strain global markets, with no vaccine currently available. Though harmless to humans, in pigs it causes high fever, internal bleeding, and will almost always kill the animal within weeks.

Overall, the decline in China’s meat output is partially offset by higher production of poultry, which has rapidly increased, and is expected to grow by 17 per cent consistently in coming years, making up around 39 per cent of the world’s total meat production.

An increase of bovine and sheep products is projected as the year draws to a close, in Argentina, Brazil, the European Union (EU) and the United States. Global changes to the world’s meat output will mean trade growth of around 6.7 per cent this year, compared to a slowing trend for other food types.

Meanwhile, the world’s most traded fruit is also in danger of becoming more scarce, amidst rising prices, as a fungal strain spreads across banana plantations in Latin America and Asia.

The Food Outlook assesses the hypothetical market risks posed by the TR4, Tropical Race 4, disease, on bananas, a vital cash crop threatened by the pathogen, which infects roots and stems.

Conservative estimates suggest that TR4 will take its greatest toll in Asia, FAO warned, which could lead to a two per cent drop in global output of bananas, cut some 240,000 jobs within the industry, and trigger a near 10 per cent rise in prices over less than a decade.

The TR4 threat “evokes the ghost of damage” done by an earlier fungus to the Gros Michel banana variety in the 1950’s, FAO said, which triggered billions of dollars in losses and lead to the rise in popularity of the Cavendish, currently under attack by TR4.

Bananas can account for one quarter of daily caloric intake for people in rural areas of some countries, and in some cases account for 75 per cent of small farmers’ total income.

The tropical fruit faces “elevated vigilance” at production sites worldwide, with thorough research on TR4 ongoing, as there is currently no fully effective cure or treatment.

Worldwide, wheat and maize production are expected to rise, while rice is expected to fall short of last year’s high, according to FAO, and the popularity of all three cereals is forecast to keep pace with, and even exceed, population growth.

Dairy herd expansions in India and Pakistan will yield more milk production for 2019, approximately 1.4 per cent globally, but in other parts of the world - namely in the EU, Australia and Colombia - dry weather is impeding the process, and for Argentina, rising feed costs and dwindling consumer demand are dampening milk yields.