WHO/Sebastian Liste A little girl gets a visual examination at her school in Lima, Peru. (March 2018)
INTERNATIONAL, 8 October 2019, Health - A staggering 2.2 billion people already suffer from eye conditions and visual impairment today, but the global need for eye care is set to increase “dramatically”, with lack of exercise a key factor, the UN health agency said on Tuesday, unveiling its first ever report on vision across the world.

While welcoming recent successes in eliminating common conditions such as trachoma in eight countries, the World Health Organization (WHO) highlighted evidence indicating that eye problems are increasingly linked to lifestyle choices, including screen time.

Youngsters are among those at risk, WHO’s Dr Alarcos Cieza told journalists in Geneva:

“In children, one of the factors that may influence the increased number of children with myopia, is that children do not spend enough time outdoors. It is a trend that is already observed in some countries like in China”, she said. “But of course, it is a trend that we can predict in other countries if they are an everyday habit, especially with child populations.”

The problem with staying inside, is that the lens in your eye rarely relaxes, WHO’s Dr Stuart Keel explained.

“When you’re indoors, the lens inside your eyes is in a complete flex state, or it’s flexed but when you’re outside, it’s nice and relaxed.”

World Health Organization (WHO) ✔@WHO

At least 2.2 billion people have vision impairment or blindness
Over 1 billion could have been prevented or have still to be addressed: @WHO’s first ever World Report on Vision http://bit.ly/2ofvys3 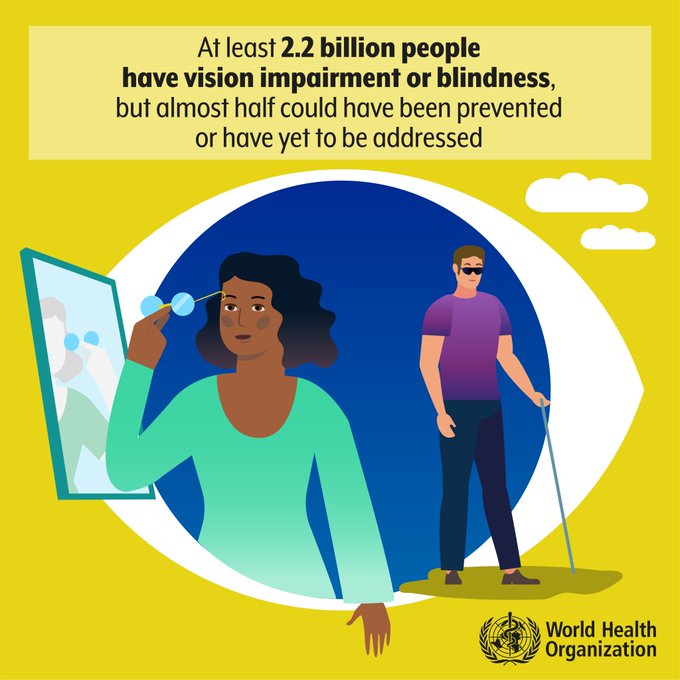 Pointing to recent scientific data from China investigating the “clear link” between time spent outdoors and the delayed onset of later-stage short-sightedness, Dr Keel cautioned that studies on “near-task” activities such as watching video on a tablet computer, were “not as conclusive at this stage”.

According to the WHO’s World Report On Vision, the burden of impairment tends to be greater in low and middle-income countries.

Women also suffer disproportionately, along with migrants, indigenous peoples, and those with disabilities and rural communities.

“Eye conditions and vision impairment are widespread, and far too often they still go untreated,” said Dr Tedros Adhanom Ghebreyesus, WHO Director-General. “It is unacceptable that 65 million people are blind or have impaired sight when their vision could have been corrected overnight with a cataract operation, or that over 800 million struggle in everyday activities because they lack access to a pair of glasses.”

Population growth and ageing - along with lifestyle changes and urbanization -  will also “dramatically increase” the number of people with eye conditions, vision impairment and blindness in the coming decades, WHO’s report shows.

One of the study’s main findings is that prevention is key, since at least one billion people are living with sight problems that could have been avoided with timely treatment.

Addressing this backlog of vision impairment or blindness owing to short and far-sightedness, and cataracts, will require $14.3 billion, the agency notes.

It points out that prevention is particularly important in low-income regions including western and eastern sub-Saharan Africa and South Asia, where blindness rates are on average eight times higher than in high-income nations.

The combination of a growing and ageing population will also “significantly” increase the total number of people with eye conditions, but this too could be turned around with preventative measures.

Typical conditions that could be treated if diagnosed early, include diabetic eye disease, along with cataracts and glaucoma.

High-quality eye care for all

Another key thrust of WHO’s report is that high-quality eye care should be accessible to everyone, regardless of their income and location.

To do this, treatment should be included in countries’ national health plans as an essential part of the overall aim of achieving effective universal health coverage, it says.

For the most part, eye conditions that can cause vision impairment and blindness –cataracts, trachoma and refractive error – are the main focus of national prevention strategies.

Nevertheless, other eye conditions that do not typically cause vision impairment – including dry eye and conjunctivitis – should not be overlooked, WHO says, noting that they “are frequently among the leading reasons for presentation to eye health care services all countries”.